World Cup, frantic build-up and then an anti-climax. That seems to be the way things work when it comes to English sporting endeavours, yet we never learn from our mistakes. We allow ourselves to naïvely become drawn into an unfounded sense of optimism ahead of major tournaments.

Who could forget the national football team’s efforts (if that’s what you call it) in Brazil last summer? Or England’s exit following defeat to France at the quarter-final stage of the 2011 rugby World Cup? In fact, it seems to me that England tend to perform at their best when the pressure is off.

There is a twofold problem, though. Firstly, as a nation, England are a pretty proud bunch, so it’d be staggering for any World Cup of any particular significance to arrive without a noticeable level of furore surrounding it.

Secondly, the media simply wouldn’t allow it to happen. It’s a journalist’s job to whip their audience (and, ideally, that’s everyone) up into a heightened sense that ‘this could be our year’. That’s what sells papers and gets people to click online. Unfortunately, these two elements feed off each other and perpetuate the situation.

So, it was refreshing to see that most media outlets weren’t jumping on the victory bandwagon this time around, as the England team went through a tumultuous period prior to and during their preparation for the 2015 ICC cricket World Cup.

The Telegraph, for example, produced an article titled ‘Ten Reasons Why England Can Defy The Odds And Win The Cricket World Cup In 2015’ – notice the choice wording of ‘defy the odds’ there. And the BBC were also being realistic with their statistical look into ‘Why England (Probably) Won’t Win’ this year’s tournament.

Just as well, really, because what happened next? Well, it was almost inevitable. It was a heavy defeat by the joint-hosts Australia in their first Pool A match.

Of course, there’s still plenty of time to recover from that 111-wicket mauling (thrashing, humiliation or battering, even, depending on your choice of news outlet) in Melbourne but, as starts go, this was far from ideal.

The only thing that could have made that defeat feel any more sickening would have been if it was handed out on home soil, although knowing that Australia enjoyed such a sweet victory in their own back garden only compounded matters really, as far as I’m concerned.

Not that the media back home were in any mood to let the team off the hook (despite this result being widely predicted ahead of the game), selecting stinging adjectives such as those already mentioned to deepen the sense of woe.
What that tells me is that there is simply no escaping criticism if you’re playing for England in a sport that receives anything more than a single column’s width of attention from the national press, unless you end the tournament with your hands on the trophy.

Unfortunately for most cricketers, they’ll finish their playing days without a World Cup haul to their name, regardless of how otherwise glittering their careers were.

Kevin Pietersen is a man who’s undoubtedly accustomed with the media spotlight and, despite arguably being given a rough ride by the England team in recent times, he believes that the current crop need to play with confidence and freedom if they are going to achieve something unlikely by going all the way in the competition.

Now marshalled by Eoin Morgan, KP is of the belief that the side are showing signs of newfound confidence since Alastair Cook’s departure as captain and have enough match winners within the ranks to make a real dent on this tournament.

Former England captain Michael Vaughan’s views were in sync with Pietersen’s ahead of the World Cup, too. Pointing to the recent run that took England to the Tri-series Final in Australia and the nine-wicket demolishing of West Indies in a warm-up match, Vaughan believed that the team were building up a head of steam going into their opening match.

With such unusual levels of low-expectancy and calls from those within the sport for England to simply enjoy their cricket and let loose, it’s a real shame that the opener ended in the manner it did. It doesn’t get any easier for Morgan’s side, either, with their next encounter seeing them take on Australia’s fellow co-hosts, New Zealand, in Wellington.

But, if you, like Vaughan and Pietersen, reckon England still have a chance of bringing home the ICC Trophy, there’s some interesting markets to be checked out across the betting sphere, no less so than with betfair who have myriad options to choose from.

And however down Morgan and co. might be feeling following the Australia game, they’ll know that there can’t be anymore similar slip ups if they’re going to stand any chance of progressing from Pool A. After all, following the tie against NZ comes a crunch match against Scotland – an encounter England can ill afford to lose on any occasion, never mind a World Cup. No offence to our Scottish readers, but a defeat in that game would certainly send alarm bells ringing around the ECB and signal one of England’s glummest starts to an ICC World Cup in living memory.

It’s not all doom and gloom for the contingent over on the other side of the world right now, though. Ireland, so often the makers of wonderful headlines in recent years, took another major scalp in their first match in Pool B, beating West Indies by four runs with 25 balls to spare.

This achievement is just the latest in a string of upsets that has seen Ireland defeat Pakistan and Bangladesh in 2007, England four years later and now West Indies.
Graeme Swann – playing for England on that day in 2011 – believes that this year’s scalp is their best yet.

Four years ago, Kevin O’Brien almost single-handedly took the game to England, smashing the fastest century at an ICC World Cup to help his side chase down the 328 target. This time, the entire Ireland squad stepped up to the plate, putting in a performance that perhaps shouldn’t be seen as out of the ordinary anymore.

That’s certainly how Ireland’s captain, Will Porterfield, feels about it.

Talking after the game, he questioned why Ireland are still considered as an ‘associate’, rather than ‘full’ member nation in international cricket, seeing as they’ve proven their worth time and time again at the very top level.
There’s no suggestion that his team now see their job as being anywhere near complete, either, as Porterfield confidently stated that they’ll be going out for two points in every remaining Pool B game.

If Ireland were to achieve such a feat it certainly would be impressive, as they’ve still got the likes of South Africa, Pakistan and current holders, India, to play.
As is so often the case with Irish teams on the grand stage, there’s very little pressure – externally, at least – but there is a huge amount of passion and that quality shines through time after time.

You have to wonder how teams dealing with greater levels of presumptions would fare if they were allowed to compete free from the shackles of expectancy?

It’d be slightly out of order for this article to be completed without a mention of Scotland’s current condition after their inaugural match of the tournament. There was, after all, certainly plenty to cover following a spirited performance. 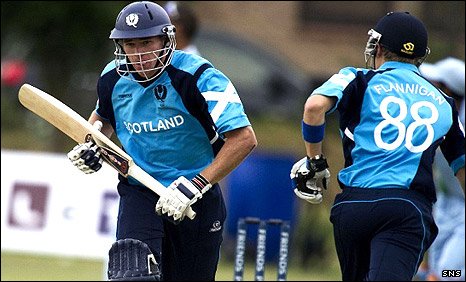 Scots themselves probably set even fewer demands upon the shoulders of Preston Mommsen and his men ahead of the competition, and although they lost to New Zealand on match-day one it wasn’t due to a lack of commitment.

Things have changed quite considerably within the Scottish national set-up since their last appearance at the ICC World Cup, not least for the fact that the entire squad can now boast to be full-time professional cricketers. That is something only two players could have claimed at both the 1999 and 2007 tournaments.

It was surely, then, partly down to this increased quality within the ranks that saw the team enjoy a reasonably fruitful preparation ahead of this tournament – beating Afghanistan by 150 runs and Ireland by a staggering 179 before going down by just three runs to the West Indies. Whether they will finish this campaign with a shock victory reminiscent of one enjoyed by Ireland in the past is yet to be seen but teams would be wise to be wary of complacency against this side.

So, how does the rest of the group stage shape up?
As already mentioned, England next travel to the Wellington Regional Stadium to take on New Zealand in an encounter that’s previously seen three English victories compared to four for their hosts. England and Scotland then face up to each other in Christchurch on the 23rd in what will be the first ICC World Cup match-up between the two.

Following that, Ireland take on the United Arab Emirates in Brisbane on the 25th and then Scotland make their way to Dunedin for a match against Afghanistan on the 26th. England’s next match after Scotland sees them face Sri Lanka back in Wellington on the 1st of March in what could prove to be another tricky tie for Morgan and his team.

And then Ireland have a huge task in front of them as they line up against South Africa in Canberra on the 3rd – a match we’re predicting to be one to keep your eye on. Scotland nip over to Nelson for a match against Bangladesh on the 5th of March and then Ireland will be hoping a victory against South Africa can be backed up by taking a couple of points from Zimbabwe on the 7th.

England square up against Bangladesh in Adelaide on the 9th and then Ireland take on India in Hamilton the very next day, while Scotland prepare for their match against Sri Lanka in Hobart that will take place on the 11th. Then it’s the last round of pool matches, with England travelling to Sydney for the game against Afghanistan on March 13th – they’ll no doubt be hoping that victory isn’t necessary for qualification at this point.

Scotland have a huge task in front of them as they finish off with a match against Australia in Hobart on the 14th, and then Ireland feature in the final tie of this stage as Pakistan are greeted in Adelaide.

Simply writing those fixtures down can leave you with a sense of anticipation and excitement. There are some sure-fire classics just waiting to be written by the contingent in the coming weeks, let’s just hope they’re not on the receiving end of such a tale.

We will certainly enjoy whatever is in store beforehand but, come Sunday 29th March, the Melbourne Cricket Ground will play host to this year’s final. Could England surprise us all and finally break their World Cup hoodoo by taking the title in a fourth final?

Might Scotland improve on their recent performances and follow in the footsteps of Ireland with some major scalps? Or might Ireland themselves surprise us all and find their way into the last two? Enjoy finding out, everyone. We know we will.